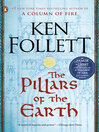 The Pillars of the Earth

The Pillars of the Earth Series, Book 1

#1 New York Times Bestseller
Oprah's Book Club Selection
If you liked the Century Trilogy, you'll love the "extraordinary . . . monumental masterpiece" (Booklist) that changed the course of Ken Follett's already phenomenal career.
"Follett risks all and comes out a clear winner," extolled Publishers Weekly on the release of The Pillars of the Earth. A departure for the bestselling thriller writer, the historical epic stunned readers and critics alike with its ambitious scope and gripping humanity. Today, it stands as a testament to Follett's unassailable command of the written word and to his universal appeal.

The Pillars of the Earth tells the story of Philip, prior of Kingsbridge, a devout and resourceful monk driven to build the greatest Gothic cathedral the world has known . . . of Tom, the mason who becomes his architect—a man divided in his soul . . . of the beautiful, elusive Lady Aliena, haunted by a secret shame . . . and of a struggle between good and evil that will turn church against state and brother against brother.

Follett takes his skills as a thriller writer into a completely new milieu, with a generational tale of lust and power, violence, love, and revenge, with faith always providing the background - families rise and fall, and keep ancient enmities alive over the span of time it takes to build a cathedral in the new High Gothic style. We get to see the violence of everyday life in the twelfth century, in parallel to the particular violence and spite of court life, balanced by the aspiration to reach for the heavens in a years-long journey of faith.

No. 3 in my lifetime top 10. Engrossing and educational.

Will read the sequel and much more. Just ordered Becket from Netflix. Very glad not to be alive in the 12th century. Ken Follett is a very entertaining story teller. He is not the least stuffy in interviews. Can't imagine where he finds the time to write so much.
On to "World Without End".

A long story. Too much specific detail of how the churches were built for me. Too much explicit sex. I'm sad that people don't understand that salvation comes by grace alone through faith alone in Jesus Christ alone. These people tried to earn their salvation their whole lives. And they mixed magic with their faith, which is not scriptural. How sad for them of that day and the author who apparently is not a believer.

Repeated treachery interspersed with bad luck and misery. If the bad actors don't win in a small skirmish then they always come back later stronger.

I read for enjoyment and escapism, but there are to many downers in this book.

What a great story teller Ken Follett is. "The Pillars of the Earth" had been described as the story of how a cathedral was built in a fictional town in the 12th century. The theme didn't appeal to me at all and the only reason I started reading it was, because I had read the sequel and enjoyed it. Boy was I wrong. While the main story is about the cathedral the book is rife with colorful characters. It starts with a hanging which doesn't feature till more than halfway through and ends with a hanging too and what happens in between is fast-paced action full of passion and thrills. A must read.

Great, complex story with multiple fascinating characters and so well written that you never get lost. The detail was so rich I felt like I was living in that time and place. A wonderful escape from all the upheaval of our current lives.

I tried, and I like the writing, but I couldn't finish it.

This book is crazy long and does read a bit slowly at times, but it's also really good and entirely worth reading. I was surprised by how much I actually enjoyed reading even the descriptions of how the old cathedrals were built.

aumazzei thinks this title is suitable for 18 years and over

Howie2020 thinks this title is suitable for 17 years and over

brihawkins13 thinks this title is suitable for 18 years and over

Cheetaiean thinks this title is suitable for 14 years and over

LauraO18 thinks this title is suitable for 18 years and over

markv thinks this title is suitable for 17 years and over

Frightening or Intense Scenes: Many murders are vividly and graphically described.

Sexual Content: Detailed and graphic sexual content...a rape of a teenage girl is described in vivid and horrifying detail.

Violence: Many murders and acts of violence and rape are vividly and graphically described.

In a time of civil war, famine and religious strife, there rises a magnificent Cathedral in Kingsbridge. Against this backdrop, lives entwine: Tom, the master builder, Aliena, the noblewoman, Philip, the prior of Kingsbridge, Jack, the artist in stone and Ellen, the woman from the forest who casts a curse. At once, this is a sensuous and enduring love story and an epic that shines with the fierce spirit of a passionate age.

"The small boys came early to the hanging."

Find it at Library